The World Tree and the Maypole: a Creation Myth.

In the beginning, there was nothing but empty space. Nothing, but a single drop of pure Awen.

And the drop brought forth a dream, and that dream became the first seed. As the seed hatched, the first tree was born. The tree that would become known as the World Tree.

And the drop of Awen became a well, so that the tree could drink of it. And as the tree drank, it began to grow. And behold, it began to have dreams of its own. And as these dreams took shape, they became the first leaves of the tree.

And as the leaves grew, they became aware of their surroundings, and as they became curious, together they dreamt up the sun, so that there would be light. And they found that the light of the sun nourished them, and allowed them to grow even more.

As the rays of the sun reflected on the pool, the world began to sing with awen.

Now, the tree produced flowers, so that it would be able to better hear the song. And thus it was that, out of the union between the flowers and the song, the tree grew fruits, which carried the seeds of the tree.

Then the tree dreamed the first animals, so that they could eat the fruits and carry the seeds further away, so that new trees and plants could grow from them, and the area around the tree would become the first forest.

And the world tree loved them all, so much so that once a year, it shed all its leaves, to share his dreams with this beautiful world. And in return, we still share our own dreams with the Tree. For when we go to sleep, we return to our source, and become part of the Tree again. And as it feeds on our dreams and experiences, it becomes ever bigger and more beautiful…

And do you sometimes wonder about the nature of the gods? Well, maybe they are simply the dryad companions of the Word Tree, sent out into the world to help it curate its dreams, and to keep reminding us all of just how interconnected we are.

So, once a year, as we gather around our maypoles, let us be reminded of this. As we dance and see our strings intertwine, we are feeding the World Tree. And in coming together as a community, we are creating the seeds of the next generations. 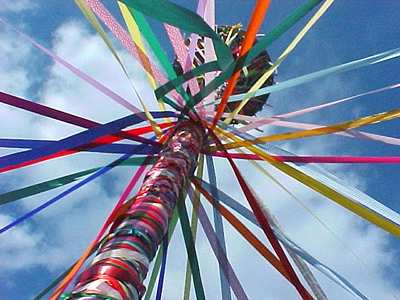 Together, let us dream a more beautiful world. For all of us, whether we are human, animal, plant or tree, together we ARE the world tree. May we dream of love, and share the beauty of diversity.