Coming face to face with death

A good time, too, to reflect on the way in which our society tends to deal with death.

This essay is based on my own personal encounter with death. My father died at the beginning of this year, after finally losing a 10-year battle with cancer. From the very first, we knew that there would be no healing for this. The cancer had already spread too far when it was first discovered, so all that could be done was to halt its progress for a while. How long, was something nobody was able to tell us at the time. ‘Until we run out of options.’ For cancer is devious: no matter how great a cure may seem for the first few months, after a while the cancer will find a way around it. One weapon down, on to the next one.

Until finally you know you are down to the last treatment, the final thing that can buy you some more time. After which, death is inevitable.

It is that final journey I want to speak about, and about the lessons I learned from it. How it changed me, and how, paradoxical as it may seem, it took away most of my own fears regarding death. And how it showed me just how toxic the ways in which we deal with death in our society are.

It is a humbling and confronting journey, to see the man you once looked up to as a protector gradually become weaker. See the person, who, before, had been there to keep you safe from the world and who you could always lean on for assistance, now more and more begin to lean on you. Beginning with simply leaning on your arm when going up the stairs, until, towards the end, needing assistance with eating, and help to change the diapers he needed to wear now.

Coincidentally, at around the same time when the final decision was made to cease all treatments, my sister got her first child. And there was a curious inverse parallel between both journeys. One new life, completely helpless at first, then gradually beginning to explore and gain more and more control over her body. At the same time, an increasingly broken body, slowly falling apart, loosing control and abilities at about the same rate. One person being born into this world, one person being born out of this world, preparing for his journey towards the otherworlds.

The very last month, a decision was made to move him into hospice care, so that all care would be taken over by professionals, thereby giving us time to focus on what was truly important: saying our goodbyes, and preparing for the journeys to come. For all of us would have to make a journey after this death finally happened. Also those of us who stayed behind: a journey back to the world of the living. 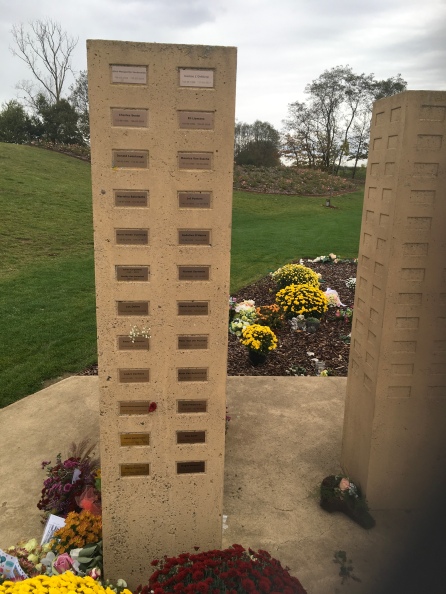 For that last month was spent somewhere in-between. In a place that was still here, but where death was a constant companion. A companion that was not hushed away, but that could be freely talked about. For we understood each other. Family members, soon-to-be-departed, hospice staff. There was no taboo. Here, death was simply part of everyday life.

And that made that this was a period that made it possible to focus on essentials. By not running from the truth, by not denying this reality, openings were created that would make the mourning process considerably lighter later on. This may sound weird, but I have almost exclusively positive memories of that final month.

How different things were afterwards. The return to the normal world. Going back to work for the first time. Seeing a hint of fear in people’s eyes when you speak to them for the first time. Having no idea how to confront this immensity, wishing it will simply go away if they keep silent. Then, immense relief when I choose to talk about something else. With the assumption that now, everything is back to normal and will now never have to be talked about again.

Can we stop doing that to each other, please? Can we, as a society, learn to start talking about death? Break the taboo? Be not afraid to talk about the fact that sometimes, we hurt? That one day we, too, will no longer be there? That missing someone does not finish after the funeral?

Let’s make it so that the most difficult part is missing someone, not having to fight for the right to feel sad. Where it does not feel as if you, as the person mourning, are responsible for shielding the people around you. Let us learn to carry each other, rather than building walls around death and sadness, stop pretending that it doesn’t exist as long as it isn’t our turn.

I am writing this on a Druid blog, because I strongly feel that we, Pagans and Druids, members of newly developing traditions, have a responsibility here. In our rituals, let us make space for this. In our sharing circles, let us not shy away from these difficult topics. When you know someone is hurting, let them know that you will hold space for them. That you are ready to listen to how much or how little they wish to share. Let death become a natural companion of the living once again, like it used to be for our ancestors.