At Imbolc this year I somewhat reluctantly made a promise to Brighid: that I would take one year ‘off’, not trying to hold down a fixed job but instead seeing where fate would take me. That year is about to begin now.

I say reluctantly because I am normally not the kind of person to do wild things like that. I am too much of a coward, and I care too much about material security. But when a goddess reaches out to you… And it did seem to be in sync with signs I had received from other sources, so… in the end I decided to say yes. But only because at that point I still had 6 months left in my current job, which I figured should be enough time to make some solid plans and figure out a way to make this adventure at least somewhat less scary.

But Imbolc now seems to be not 7 months ago, but something that happened in a different century, to a different person, in a different universe. For shortly after I made that promise, someone pulled the plug on reality. The corona-virus arrived, and I was among the first wave of people to get infected, somewhere around mid-march, right at the beginning of Lockdown.

Six months later, I am still in recovery. Somehow I’ve managed to fulfill all the responsibilities I had left at my current job. But the price of that was that I had almost zero energy left to even start thinking about the future. These last six months, I have lived in a weird kind of limbo that was a combination of doing my best to not fail my students too badly, then in summer spending most of my time in the otherworlds trying to deal with all the tears of a lifetime, which somehow this experience was bringing to the surface. I had a strong feeling of ‘your body will not heal if you do not heal your past as well’. The rest of the time I mostly spend on the couch, sleeping.

I don’t know what happened to the person who started this journey six months ago, for somehow that’s just not me anymore. There’s this classical notion of ‘shamanic death’, where the spirits will completely tear you to pieces so that they can then remake you. That seems to be what happened to me this year. I died.

But how do you return from a journey like that? Once again, the virus is giving me little choice in the matter. If none of this had happened, I would probably now be busy applying for jobs, or probably already have started on a new job (Honesty requires me to admit that old me would have ended up finding a way to wriggle out of that promise to Brighid, because I was too scared). Only things ended up not exactly going like that. Because I’ve had to reluctantly accept that I am not yet healthy enough for a new job. I may have been able to survive on my old job that was mostly familiar routines, and which I could do while lying on the couch at home.  But… good luck applying for a job when you have to admit that you are still in recovery, and cannot even guarantee your employer that you’ll last a week. Not if that job requires you to be on your feet all the time, or even sit on a chair in an office all the time. And certainly not if it’s the kind of full-time teaching postition that I had intended to apply for.

And so it seems that Brighid is indeed going to get what she wants (and I wonder whether perhaps she was merely asking my permission for things to play out the way they did – for certainly she must have known how scared I was). I’ve enrolled for a 1 year training course on the topic of ‘facilitating rituals’, which will mean going back to school one day a week. I don’t know yet what I’ll be doing the rest of the time. My body and fate will decide about that, no doubt.

I have never before in my life looked at a future that was this empty. It still scares the hell out of me. Especially since there will be no safety net, and there’s no plan B. And I am living alone, so there’s no husband to hold my hand during my Foolishness. 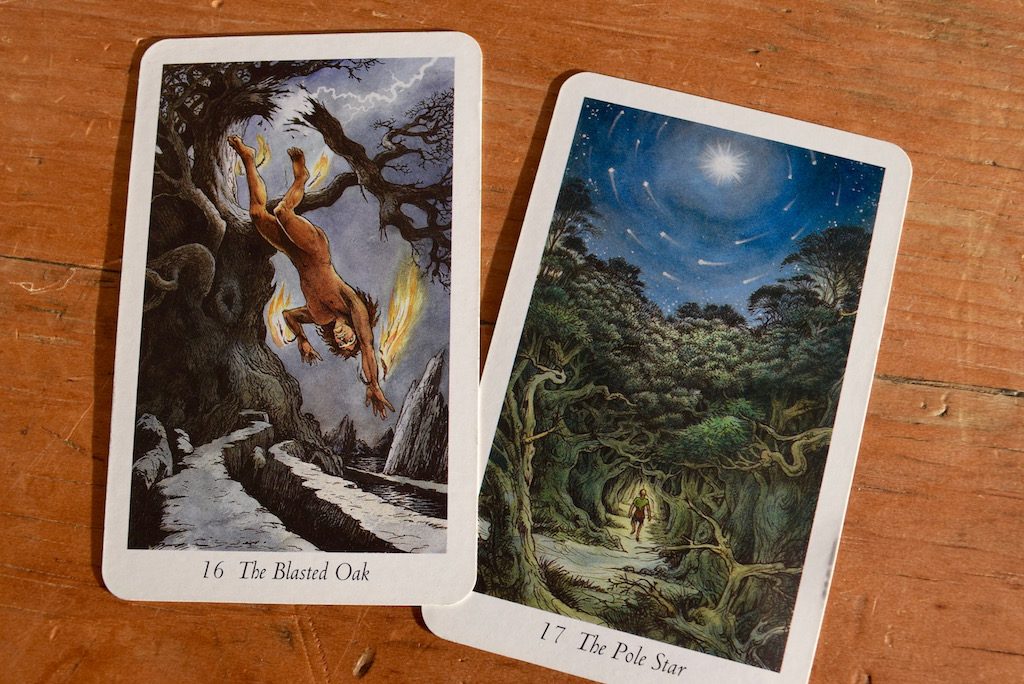 The only thing I have right now is Hope. The foolish hope that, now that the Tower has come crashing down on my life so spectacularly, that that means that next there will be the Star waiting to guide me to somewhere. My gut feeling tells me that this is the right thing to do, and that this is the journey my guides have been preparing me for in previous years. But then there’s always this nagging doubt that maybe I am hearing it all wrong after all. And who can guarantee my body will not betray me again?

But I see no other option but stepping off that cliff right now, and hoping that somehow I survive the fall. I intend to revive this blog, which has been mostly silent this year due to lack of energy, and use it to write about my experiences along the path.

I’ll end this post with this channeled message from the Spirit of Hope. I hope that at least some of that may apply to this Fool here…

I am the star that shines in the distance when the world around you has fallen apart. I am the survival skill that makes the difference between a victory for death and the triumph of rebirth. I am fate accepted and lived to the fullest.

I will guide you on the path that few people manage to find. The path of the fool.

Let me explain you what that means. It means that you accept being driven by necessity when the reality requires it. But only then. In all other circumstances, the fool chooses the path of the heart. The path that is most connected to the soul of the universe. The path of the dreamer.

This is not the path of the idiot who lives in denial of reality. Rather, this is a path that can only be walked with complete awareness and with a loving heart. The universe only speaks to those who pledge to listen.

It may sound like a stupid idea, to follow the way of your heart when common sense tells you that it may ruin you, and will literally cause you to fall off the edge of the cliff into a place where no more help can reach you.

But there are places that can only be reached that way. By falling in full consciousness of your own foolishness. By stepping out into the darkness knowing that there’s possibly nobody standing by to catch you, and that the mystery you fall into will have to be your teacher.

For the dream must be dreamed before it can become reality. The fire must be fetched in the otherworld so that humanity will have light to light their torches with.

The fools do not bring about the revolution. But they make sure those who do have dreams to work with. The fools give away their own future so that others could have one, by traveling the road of hope and pointing out that stars still shine in the sky.